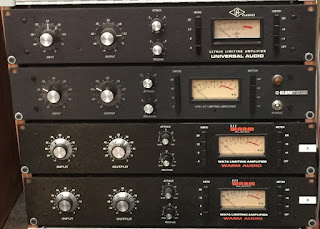 TOP TO BOTTOM, UA1176LN, 1176KT, WA76 PAIR
Article update, August 4th, 2020
The number 1176 refers to a specific model and brand of audio compressor/limiter invented by Bill Putnam. The UREI company was bought out in the 80's and the 1176 was retired in favor of other lower priced alternative offerings.

The original 1176 units evolved and changed over the years they were produced and these changes inevitably altered the way they sounded in use. You'll find references to "Rev D" or "Blue Stripe" which are ways of identifying the best versions of the vintage models.

Today, new 1176 units are manufactured by Universal Audio (which was founded by Bill Putnams sons), these are very high quality units made in the USA. In 2004 our studio acquired a new UA1176 and our love affair with the '76 began, far and away it is our "style" of compressor at Proworkshop.

The company Warm Audio based in Texas set the pro-audio community on fire when it released the WA76, a recreation of the 1176 based on some of the most desirable units ever produced. What really set the WA76 apart was how good it sounded and the street sale price of $599. This unit put Warm Audio on the map and marked them as a serious player with a take home purchase-price which is less than 1/3 of the price UA asks for their 1176.

In late 2016 another bargain priced '76 entered the market, this time from a serious high end brand name, Klark-Teknik. This is a British company that has traditionally manufactured extremely expensive signal processors. The company was bought by Music-Group and they are engineering products for other Music-Group divisions such as Behringer, Midas and others.

The Klark-Teknik style 1176 is simply known as the 1176KT, it differs from some of the other recreations by using a toggle switch for power and moving the VU meter slightly to the left. All the controls and features are identical to other mainstream 1176 imitations. The KT 1176 is also priced at $599 street, the same as the WA76. Price update, while revising this article, todays price on the 1176KT is $399.

Lets compare some basic features before talking about the sound quality.

The UA1176LN has barrier strip inputs and outputs plus it features XLR input and output connectors.

When it comes to physical weight the UA1176LN is the heaviest of the three, the KT1176 is the lightest and the WA76 falls in-between.

All three units are standard 2U-19" rack mount and feature a large front panel VU meter which may be switched to indicate input level, output level or gain reduction.

The WA76 features a two position input attenuator switch on the back so the unit can handle larger input signals. Neither the UA1176LN or 1176KT have this feature.

We've been using the UA1176LN the longest of the three units. It was our first introduction in to the world of 1176 compressors. Prior to obtaining this unit we used compressors by DBX, Behringer, Ashly, and ART.

What really sets the 1176 apart from other compressor designs is the speed of its attack, this compressor is fast, the fastest settings are rated in micro seconds not milli seconds. The release time is also fairly fast even in its slowest setting.

The 1176 can tighten up a kick drum or snare drum better than any other compressor limiter we've used. With the attack set fast the release time becomes a sustain control which can make the kick drum click (fast release) or bloom and boom (slower release).

Patching audio through the UA1176LN causes the signal to be a tad darker sounding, through the WA76 things sound a tad more Hi-Fi and the 1176KT falls in between the other two with a nice natural response.

All three of the units basically function and sound the same with the exceptions previously noted.

WHICH ONE TO BUY?

Which unit should you choose? The UA1176LN has a retail price of almost $2500 and sells at Sweetwater for $1999, you can read more reviews and gather specifications on their web site.

The WA76 is priced at $599 on the Sweetwater web site, you can read more reviews and gather specifications on their web site.

The 1176KT is priced at $599 on the Sweetwater web site and you can read more reviews and gather specifications there. Currently $399.

When the WA76 entered the market place it was a game changer, finally the benefits of 1176 compression were obtainable for an incredible price. We immediately acquired two of them and have loved using them on a variety of tracks over the last year.

When the 1176KT became available we quickly added one of those to our kit and have since added a second one. These are only about four months old now so we have not had time to judge them for reliability yet but so far they are working great. Update, the studio now has four of the 1176KT.

The WA76 utilizes an external wall-wart power supply, we hate these, they are awkward to mount and they induce noise into nearby audio cables so they must be mounted away from everything. On new current model the WA76 features in-built supply, same as KT. Our WA76's are just a little over a year old and both units have failing input volume controls. Fortunately we bought them from Sweetwater and they are covered by their extended warranty coverage, all we pay is the shipping cost for getting them repaired. They are leaving next Monday for repair. Update, they went to Warm Audio for repair, they returned better than new and have functioned beautifully ever since, almost two years.

The UA1176LN sounds great but at $1999 it's more than triple the price of the other two competitors which in our opinion sound equally good.

This leaves the 1176KT as our recommended unit to buy. It sounds great, the controls feel good, it sounds like an 1176 is supposed to and the in-built power supply is nice.

Purple Audio has been making an 1176 clone for many years. Their equipment is painted a distinctive purple color. The Purple Audio MC77 is currently priced at $1650 and many professionals swear by this unit.

It's great to have so many 1176 options and especially low priced models that look, operate and sound like the higher priced versions.

Once you wrap your ears around the 1176 sound you won't want to settle for less ever again.

Proworkshop purchases and uses the gear we review.

Good music to all!
This article is ©2021 by Mark King, it's not ok to copy or quote without written permission.