RECORDING STUDIO HEADPHONE OUTPUT SELECTOR BOX
by Mark King for proworkshop.com
In my studio there are five headphone outputs I need to access regularly, they are:

1 The output from my digital mixer

2 The output from my Powerplay headphone mixer

3 The output from my stereo mastering recorder

4 The output from my Neve mastering mixer

5 The output from my Soundcraft 40-channel analog console

I wanted to build a selector box so I could pick headphone sources without physically moving my headphone plug from gadget to gadget. This DIY article will show you how I did it for our studio.
The number one design constraint on this project was don't blow anything up or break any electronics (from possible shorts, miswiring, bridged connections, wrong switch, bad soldering). Everything feeding this box is expensive so I wanted to be extra sure this selector was done right.


I finally found a 6-position rotary switch that has non-shorting contacts and three tiers of switch points so it can cleanly switch the three electrical conductors from each headphone amp without shorting or common grounding. I ordered the minimum quantity of four from Amazon, they cost a little under $18 for four.
The switches turned out to be quite good quality from China. They are a little stiff to turn from position to position so I chose a large vintage style RCA knob. I had the aluminum enclosure in stock (it's a Hammond model purchased from Mouser Electronics in Texas).

With the parts finally all in my hands, switch, enclosure and a bag of Switchcraft jacks, I set off building the Ultimate Headphone Selector Box.
The proposed physical location for the box would be attached to the side of my mixing console stand as you can see in the first photo. I used wood screws to attach the Hammond enclosure to the console stand.

The whole box needed to be compact so as to not block access to the patch bays located behind the headphone selector. This meant all the jacks needed to be on the small face of the enclosure.

It took an hour of careful layout, measuring and planning, then I drilled all the holes in the enclosure for the rotary switch, a toggle switch and nine TRS Switchcraft isolated female jacks. Fitting the nine TRS jacks on the small face was the hardest part of the layout. It was also difficult fitting all the wiring to the jacks.

I made up about 10 feet of Green, Red and White twisted wire using my electric drill, I put one end of the wire in a vise and the other end in a small electric drill, then I spun the wire into a nice tight twisted group. This kept the wire neat and compact inside the stuffed enclosure.

This was not a tough build, it was all about execution, keeping contacts from shorting against each other and the walls of the electrically conductive aluminum enclosure.

After I finally got the box built and filled with all it's parts I tested the signal paths extensively with my voltmeter to be sure there were no "equipment-killing" short circuits waiting for me.

Next I mounted the box. The final part of the project was making the five custom headphone cables that feed the various headphone outputs from equipment back to the new selector. I constructed five  TRS to TRS cables, each of which plugs into their respective sources and lead back to the selector box inputs. I decided to make new cables so they would all be equal. I used twisted-shielded pair 22ga CL3 white jacketed install-cable from Amazon for these TRS headphone cables.

The selector box has a sixth unused input on it currently. I'm planning on putting that in to the patch bay so any rogue piece of gear can be put into that sixth headphone selection location. The Kemper Profiling amp would be nice to have right there.

HOW DID IT TURN OUT?
The build started at 8am and I was finished installing it and all the new cabling by 4:20PM. I took my time on every step of the way to completion. The box had to be right or gear might be damaged. The cables had to be right because it would affect the sound negatively if they were wrong.

In use it is a joy to have this selector box to pick sources instantly. It was always a bummer to need to move my headphone cable to a different output source. Now I can quickly check the feed going to the mastering recorder right in the middle of a session.  No more headphone cables and multiple sets of headphones laying around all over the console. Right at my left hand I can select the source to my headphones and that is a wonderful and useful utility.

This is just one more of those handy boxes that helps me stay focused on the music instead of fiddling around with cables and plugs. I now have a better idea about how each source sounds because I have an instant A-B change when I turn the knob on the selector. 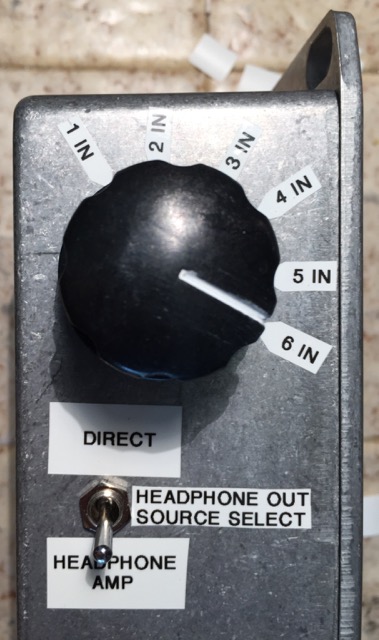 The headphone distribution amp completely isolates the feed to my headphones and reduces the load on the sources to an insignificant level. This can be a good thing since my 30-40 ohm ATH-50 headphones are too low in impedance to be direct connected to the Soundcraft console headphone output which is rated at 200-ohms minimum impedance. The Neve mixer also recommends a higher impedance headphone so having the amplifier in the loop buffers my Audio Technica headphones from the various outputs.

By using the headphone amp to drive my headphones distortion is reduced across the board because none of the signal sources are being asked to provide any significant current to drive headphones.

I like having both sources available to my headphones. I can verify signals directly off the rotary switch and monitor the headphone amp for even lower distortion.

I hope you enjoy the photos and get inspired to build your own problem solvers.