BIG SNARE DRUM = BIG SOUND
by Mark King for proworkshop.com
I've always been a big fan of the drummer John Bonham, the style of his playing and his tone were both very influential on me. He was notorious for many unique and interesting drumming characteristics but the size of the taller snare drums he used made the biggest impression on me.

I put together my first studio drum set in the mid 1970's, it was a conglobulation of Ludwig, Rogers, Premier and a bunch of cheap pieces people gave me (because I had zero money). Over the next 37 years my studio drum set evolved a lot but it was always a patchwork of used pieces, tuned and assembled the best I could. I eventually invested in the Yamaha snare drum we still use today, it cost more than all the other drums I owned, a lot more! Everything changed when I got TuneBot for drum tuning, suddenly I could really tune drums to sound their best and this caused me to want a great sounding set for recording.

In 2012 we began building the new drum kit for the Proworkshop Recording studio. I was studying all the drum brands trying to determine what we should invest in. In particular I was thinking about the height of the snare drum John Bonham used when I went on the chase for the tallest snare drum I could find. That chase ultimately led me to this Ludwig 12" tall x 14" diameter snare drum built for marching bands. 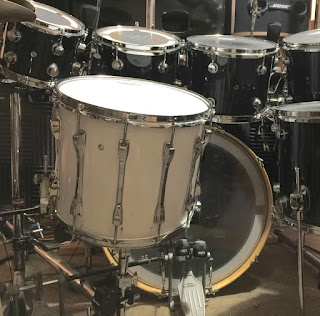 According to the Ludwig web site our drum is a 1966 model. The hardware on this thing is massive and the drum itself is fairly heavy due to thick sidewall construction. Ours is made from maple and the interior is coated with a clear lacquer. 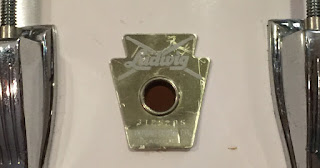 I originally bought the drum off ebay, it was one of those items advertised "in great working condition, completely refurbished by seller". The package containing the drum arrived and it looked terrible, one side of the box was crushed and I had a horrible feeling as I opened it. Sure enough the drum was damaged, the mechanism that adjusts the snare tension was bent and not functional.
Marching snare drums use a different kind of snare, it's referred to as "gut" and each strand of gut usually has an individual adjuster for tension. On mine the whole mechanism was in horrible condition. It was hard to tell where shipping damage ended and just plain worn out drum began.
The more I examined the drum, the more I realized the seller was trying to put one over on the buyer. The rims turned out to be from some other brand of drum, they did not fit properly nor did they tension the heads evenly. The lugs were also the wrong thread size so they did not adjust well at all, they were basically stripped and cross threaded into the drum. The heads on the drum were the cheapest garbage I've ever seen, like toy drum heads or maybe even worse.

I complained to the seller and told him that a bunch of mismatched and wrong parts did not make a refurbished product. He could either take the drum back or I'd give him horrible feedback and complain to eBay for false advertising. The seller refunded all my money and said "keep the drum".

I stripped off all the hardware and studied the shell, it all seemed in good solid shape. I kept watching eBay and eventually found a seller advertising rims for a vintage Ludwig marching snare. After corresponding with the seller I discovered he also had a set of lugs for the drum so I ordered his rims and lugs for my drum.

I carefully threaded the lugs into the fittings using metal cutting-oil to help straighten and clean out the threads. Fortunately the seller had used some really cheap replacement lugs made of soft metal, the lug threads stripped instead of stripping the female threads on the drum. With a little patience and slow methodical work I got all the new lugs functioning, this allowed me to install a resonant head on the bottom of the drum.

Once that was on I could turn my attention to attaching new snare wires to replace the broken gut system that originally came on the drum. I used a Yamaha stainless snare wire that came on my Anton Fig custom Yamaha snare drum, it took a while to mount but I got it working.

At this point the drum did not sound very good. I replaced the top head with a used head I had so I could experiment more with tuning the drum. The more time I put into it the worse I liked it, it just sounded dead and not interesting. Eventually I set the drum aside and did not want to waste any more time or money on it.

I was tuning up the snare drum on our studio drum kit using TuneBot and for some reason it made me think of the old Ludwig marching snare. I wondered what the head pitches were since I did not have TuneBot back in 2012.
I went out to our warehouse and after looking through a pile of boxes I found the Ludwig snare drum. My friend Paul had carefully wrapped the drum in bubble wrap, it was still wrapped up from our move in 2014, I unwrapped it and took it into the studio. A few quick taps with a drum stick made me remember why this drum was languishing in storage, it sounded dreadful. This time I was going to make it sound good or throw it away.
I ordered new Remo heads, a 3-mil for the bottom snare side and a new coated Emperor for the batter side.
Back in 2012 I replaced the snare wires on our Yamaha snare drum with a 14x6 Equalizer series from PureSound. The PureSound snare wire sounded a lot better than the original stainless steel model that came on the Yamaha.

It was finally time for a brand new snare wire on the big Ludwig snare drum, I ordered a PureSound Equalizer snare wire set with 16 strands.

I've come to know this big old Ludwig snare drum as "The Beast", it's the size of a floor tom and has 12 lugs instead of the typical 10 found on modern rock snare drums. The thick walls of maple give this drum some serious weight compared to a conventional sized snare drum.
Because the new snare drum is so tall I had to fabricate a new legless stand to accommodate the additional height of the Beast in our drum kit.

THE NEW BUILD
I stripped the Ludwig back down to the shell and noticed that the original Ludwig dampener mechanism for dampening the batter head was rattling loose in the shell of the drum. As with everything the old dampener parts were rusty and stripped and could not be easily removed. I took the drum shell out to my shop and using a Makita powered saw I was able to cut the old dampener mechanism off the drum shell and eliminate the rattle. While I had the shell out in the shop I cleaned the bearing edges with mineral spirits and lightly sanded them with 800-grit paper to remove any oil and grunge buildup.
I installed the new Remo top and bottom heads first and tuned them, TuneBot recommended 266 Hz for the top head and 398 Hz for the bottom. Finally I installed the new PureSound snare wires, this required a string on one side of the snare wire to be gripped by the end that was formerly the gut-adjusters. The PureSound snare wires come with thin wires that can be used for mounting to the snare, I used one of these wires on the throw-off side of the snare bed.

TIME FOR A LISTEN

So after all this work and new parts how does it sound? Absolutely brilliant! I could not believe my ears, after hearing this drum sound so bad for so long it was a joy to hear it producing not only useable but amazing tone.

I set the Beast up next to our Yamaha Anton Fig signature snare drum for A-B comparison of the sound. Wow, the Beast is now our best sounding rock snare drum. Even though the head pitches on the Beast are tuned higher than they are on the Yamaha the old Ludwig has a deeper and much more pronounced voice.

WAS IT WORTH IT?

Yes! The Ludwig marching snare drum in original configuration is selling currently for $400 to $500 on eBay. Mine cost nothing since the seller gave it to me. I spent $75 for the replacement rims and lugs and another $16 on the new PureSound snare wires. So far I have around $30 in new heads for the Ludwig so my complete monetary investment is around $120 total, that's a deal for a really kick-ass sounding Ludwig snare drum.

Besides getting the drum I also got a lot of knowledge along the way. When I first began this project I was not really sure how a snare drum should be tuned. As a result of all my reading, studying and experimenting I've learned a lot about drum tuning and I got an amazing and unique snare drum that will be delivering some juicy rock recordings for many years to come.

WOULD I DO IT AGAIN?

Maybe. It all depends on how much you want or need a good snare drum tone and how far you're willing to go to get it. My $120 Ludwig mutant drum is competing with a Yamaha custom shop drum that cost me four-times as much, both have very different voices that are unique and desirable.

I was lucky, I started with a high quality Ludwig drum shell and after replacing all the worn out hardware and heads I have a very good sounding drum for recording. I would not recommend this journey with a drum of lesser quality, I'm just not sure the man-hours required to bring it into good tone would be worth it but for this old Ludwig Beast it was a journey worth the effort.