THE DIRTY DOZEN, WHICH DISTORTION PEDAL TO BUY?

It’s easy to shop for ridiculously expensive distortion pedals and there are many to choose from. Thankfully there are also countless low priced distortion gadgets and since I’m a bottom feeder at heart I have many of these budget performers as well as a few of the expensive models. 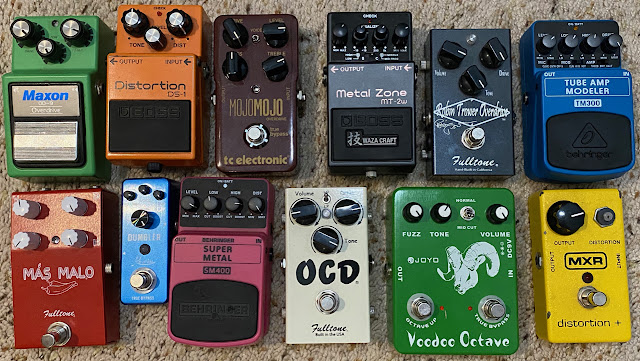 I was working on a song that I could not quite get the guitar part to sound right so I pulled out almost every distortion pedal in stock and tried the song with each one. It was a fascinating day with many surprises. My producer was sitting in earshot and commented on each pedal as I worked my way through them.

I simply replaced the single distortion pedal location in my pedal board chain with different distortion pedals, everything else remained the same while I tried each pedal in the context of an eight minute song.

I compared $200+ boutique handmade in the USA pedals to anything else I had on hand including super ultra budget pedals.

My only criteria was the tone and how the distortion sound fit into my pedalboard soundwise. I ended up playing the 8-minute song about 20 times so I could experience each distortion pedal in the context of the music.

I have the distortion pedal on a loop from a Voodoo Lab bypass switcher so when the distortion is not being used it is externally bypassed by the Voodoo switching system.

I’m not naming names here, that’s not my point. The point is the sound, that’s all that matters. Some distortion pedals I could feel immediately that they were not right for the song. Some pedals were OK but did not push my button as a performer. Three of the pedals spoke to me very strongly, based on articulation, sustain, overall tone and how they made me feel while playing the song.

The chosen one, THE distortion pedal for my song “Sailing Ships” was an under $30 pedal available on Amazon (that’s where I ordered it from).

One of my most expensive pedals, the Fulltone “Robin Trower Overdrive” was also in the running up until one of the least expensive blew it away.

Don’t let price or hype be your guide, use your ears and your musical heart to find what works in the context of your music. Excessive midrange or wonky distortion gimmicks were not what I wanted but it took an adventure through the inventory to find the right distortion for the song.

Three of my “in stock” distortion pedals are seriously in jeopardy of heading to Reverb dot com for conversion to money for other gadgets I actually really like. It’s shocking to discover I own things that I actually don’t really like. You might like them in your own context but it’s fun for me to discover what’s NOT working in the context of the music I’m creating.

All distortion boxes were cheap at one time in the past, their simple 1, 2 or 3 transistor circuits were comparatively inexpensive. It’s our lust for that elusive tone that has spawned an entire distorted boutique industry of little boxes wearing the moniker of “Overdrive” or “Distortion” and sometimes both.

Find the pedal that “speaks” in your song and don’t let the price of the pedal be part of the decision.

Good music to you.