I have at least 10 flanger pedals, I love the effect when it's applied judiciously.

Catalinbread is a boutique pedal builder located in the US state of Oregon. Their Zero Point flanger caught my eye with its unique knobless construction and preset controls. The only controls on this pedal are the on-off pushbutton and the momentary "activate" button. A LED tells you when the pedal is ON. A standard inner-minus/outer-plus power inlet is provided, this pedal does not accept an internal battery. According to the Catalinbread web site and nomenclature on the pedal it is capable of running on 9-18 volts DC. The pedal enclosure is a cast metal box.

This is not a modulation pedal that sits there wooshing up and down when it's engaged. With the pedal ON a very mild bit of cycling can be heard. The magic happens when you push and hold the momentary button.

When you use the ON button to get the effect ready to fly there is a slight volume boost. For this reason I keep the Zero Point on an external loop switcher which brings the effect in and out with preset combinations of distortion coming before the flanger.

I've done tape flanging back in the 60's, 70's and 80's, it was not easy and often required multiple attempts to get the effect positioned correctly in the song I was working on.

The Zero Point is marketed as a "tape flanger" and while I do like the sound this pedal produces it's not as intense as real tape flanging. Catalinbread takes some liberties with their marketing when it comes to describing their gadgets. I found their Belle Epoch Deluxe Tape Echo Pedal sounding more like a tired broken Echoplex rather than the fat echos my old EP3 delivered. Calling these "tape effects" is just wrong to an old recordist like me. These sorts of branding attempt to latch on to the hype that most humans have no experience with.

Overall I like the Catalinbread Zero Point flanger. The simple interface makes it easy to inject big whooshing goodness into my solos.

With a street price of $209 the Catalinbread Zero Point is not an inexpensive effect. For those on a tight budget I found that the Caline "So What" flanger pedal is capable of an almost identical sounding whoooosh and at under $35 it's a lot more affordable. The Caline does not have the simple interface for injecting the tone but with the controls set right it's a dead ringer for the effect by the much more expensive Catalinbread pedal.

I am keeping the Zero Point because I like the tone it produces, I can count on it producing the effect since there are no knobs to misadjust. Sometimes a good preset is what's called for. In my studio where I'm jockeying around 100 gadgets as I perform and record a dependable preset is something I like.

I think Catalinbread should be commended for doing something bold and different with the design of the Zero Point. I wish the price was lower and that they did not market it as "tape". A more accurate description would be "in the style of tape flanging" but that would limit the mystique and hype.

If you have the funds and you're looking for a unique and different flanger pedal I recommend the Zero Point.

BTW this review is copyright 2021 by Mark King. It's not ok to copy or quote without permission. H.o.T. is a labor of love, there are no affliate marketing links or advertising. Thanks for reading. 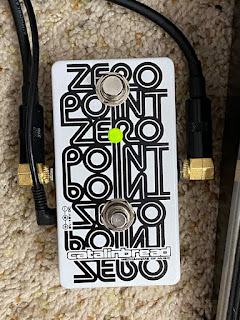