by Mark King
I have been a big fan of Electro-Harmonix for years. My first effect gadget back in the early 70's was an EHX LPB-1 which I used to overdrive the input on a Fender Princeton amplifier and later a Fender Super Reverb.
EHX has made a lot of useful utility pedals over the years. The pedal on review in this article is one of the most simple, useful and low priced gadgets available today. 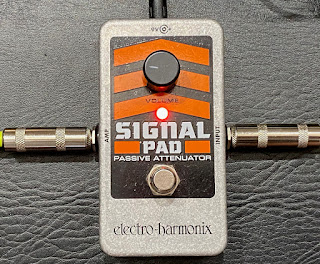 The "Signal Pad" pedal is one of the most simple in design, it is a volume pot in a box. It has an input and output with a true bypass footswitch and LED to indicate when the Signal Pad is modifying your signal. Basically the Signal Pad makes any signal smaller in size.
It's the opposite of a clean boost, it's a clean cut.
Why would you want that? I've found that some effect pedals work entirely differently when followed by a Signal Pad set to some amount of signal reduction.
My wah wah pedal has a completely different sound and wah effect with a Signal Pad cutting the output level. My 16 year old Fulltone Clyde wah wah has quite a bit of boost when engaged, this can be good with some amplifiers but for clean filter sounds it can be too much. Enter the EHX Signal Pad which I can add or subtract from the wah output signal path. Without the Signal Pad the wah pushes the amp into break-up but with the Signal Pad engaged I can get a nice fluffy sweet wah wah effect.
I've noticed that some distortion pedals have a better tone with their master output level cranked up. This can easily be too much and makes the distortion too loud. Putting a Signal Pad in the output signal path of a loud distortion effect allows the level to be reduced to where it fits in the mix, same as a master volume control on an amp.
You can put the Signal Pad into the external effects loop of an amplifier and have a preset "reduced" level which can be handy in some songs.
The Signal Pad is classic modern EHX construction. It's a nice cast aluminum enclosure with input on the right and output on the left. An external 9-volt DC power inlet with standard center-minus/outer-plus wiring is provided. The pedal also comes with and can be powered by a standard 9-volt internal battery.
I have found the best application for the Signal Pad to be following an active device like a distortion or wah. The impedance of the Signal Pad is a bit low for putting into standard unbuffered signal paths, I would not choose this to go between my Stratocaster and the input of my tube amp. The low impedance of the Signal Pad causes a bit of high frequency loss in passive signal paths. 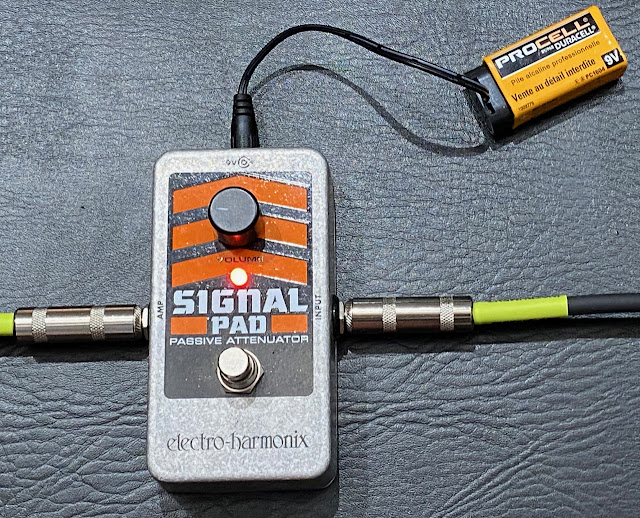 I love this pedal, I currently own nine Signal Pad boxes. I'm constantly experimenting with them for level and volume control.
At about $45 street price the Signal Pad is one of the lowest cost EHX pedals available.
EPILOGUE
I purchased and regularly use the pedals and devices used in this review. There is no embedded advertising or affiliate links, you can buy one wherever you can find one.
H.o.T. is a labor of love, thanks for reading.
Good music to you!
BTW This article is copyright January 2021 by Mark King. It is not ok to copy or quote without written permission.