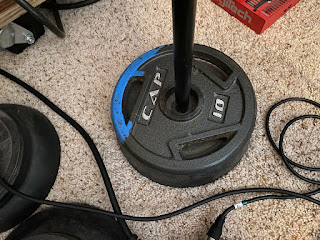 For playing live I like tripod-base mic stands but in a crowded studio situation the three legs often take up too much floor real estate. A round-base mic stand takes up a LOT less physical space but they are often too unstable to support a boom arm and a heavy cluster of microphones.

Get a 10 pound “Olympic” barbell weight, one with a two-inch hole in the middle. An Olympic barbell weight easily goes over the clutch and other parts on virtually any mic stand. Here is one in action in my amp room. 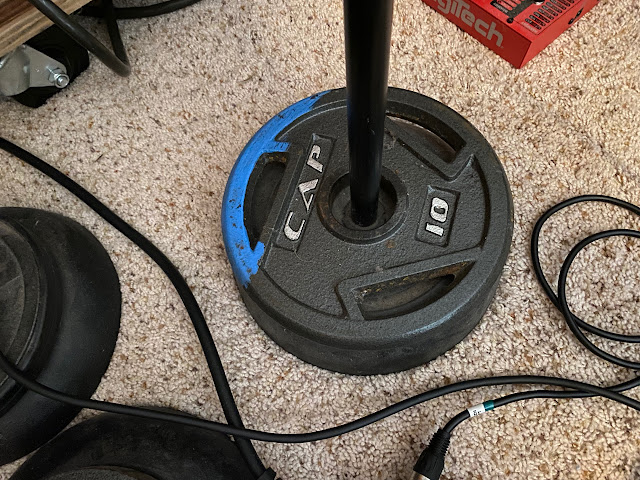 I’ve outfitted virtually every round base stand in my studio with Olympic weights, it makes them feel like they’re bolted to the floor. Nothing to stop you from using other weight platters for different size stands. I added 5-pound platters to a bunch of old Atlas desktop stands and they’re now holding boom arms on my drum set.

No need for a new $200+ Latch Lake stand (although they are really amazing and high quality). A 10-pound barbell platter added to a standard round-base $20 vertical mic stand will dramatically increase the stability of the stand when using booms and heavy U-47 style or other large weighty microphones.

Any decent sports retailer sells the Olympic weights but you need to look for and verify the two-inch hole in the middle. Here is a new platter I ordered for under $15 online. It took a few days to get here but it works great.

Thanks for reading High on Technology, Good Music To You!

©March 2022 by Mark King. It’s not ok to copy or quote without written permission.