RIBBON MICROPHONE FOR
ELECTRIC GUITAR
SHOOTOUT AND REVIEW
by Mark King for proworkshop.com

We decided to do a shootout of several models with the Royer 121 as our high-end control.

Using a Rupert Neve Designs direct interface we recorded a simple hard rock series of power chords which were then re-amplified through a Mesa Boogie combo amplifier. By using re-amplifying technology we could expose each microphone to the exact same source material. 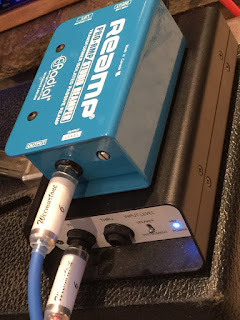 In the first recorded pass each of the microphones was carefully placed in front of the amplifier in exactly the same physical position relative to the source speaker. One by one each microphone  recorded the identical same guitar performance sourced from our Reamp box and played through the Boogie amp.

In the second recorded pass each microphone was positioned for best possible tone with that microphone. Tone was determined by listening through high-isolation headphones as the microphone was moved around to achieve the optimum position and sound quality.

After all the recording was done we began listening to the microphones and comparing them to each other. Having all the microphones playing back the identical recorded passage was extremely helpful and revealing when they were compared in A/B listening tests.

The playback volume of each track was carefully matched so we could evaluate tone accurately.

The Royer 121 sounded good in both recording tests and it was not difficult at all to easily pick out the Royer every time. For $1300 you'd hope it sounds better than some inexpensive competitors from China. 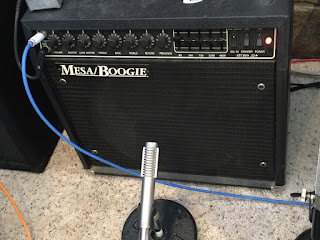 Lets cut the suspense and get to the huge surprise from the listening tests. The Nady RSM-4, a microphone we bought off Amazon.com for $79 was our favorite low priced performer. It had the most natural and best sound of the bunch. This was a bone stock microphone which for all the world looks and sounds like the much more expensive Cascade Fat Head. 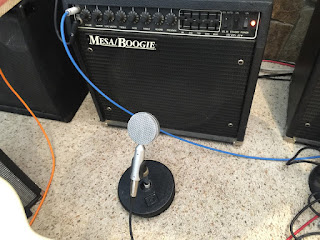 Surprisingly the MXL R144 was next behind the RSM-4. The MXL sounded very similar to the RSM-4 but was a tad darker overall. For under $100 from Amazon.com the MXL is not bad and it's a great looking microphone which comes with a shock mount. 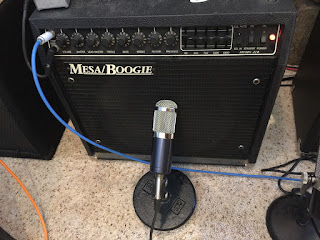 The absolute worst of the bunch was the BadAax active ribbon microphone. This is a very strange piece, we wanted to love it, the microphone has a heavy feel and a nice shock mount, that's where the positives end. The microphone came with zero documentation, nothing, not a stitch of any printed anything anywhere in any of the packaging.

As an active ribbon microphone I would expect it to not function without phantom power, ours worked just fine with zero phantom power. In this mode it had about the same gain as the other budget ribbon models but the sound quality was extremely dark and distorted.

With the phantom power turned on the BadAax sounded like a cheap transistor radio from the early 1960's. We considered keeping it as a special effect microphone, one you might choose if you need really low fidelity sound quality. In the end the BadAax was just bad and got returned to Amazon. 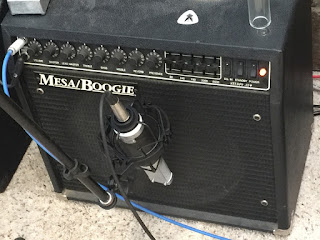 Our last candidate is the Fab 56 ribbon microphone. It is billed as having a sound that rivals the most expensive, a tall claim that was not borne out by our testing.

Chris, our contact at Fab microphones was very nice and we intend to follow up with him. His real product is the Fab transformer inside the Fab 56 ribbon microphone. The mic itself is a popular Chinese model which Fab retrofits their transformer into and resells. The ribbon motor itself appears to be the stock Chinese offering used in many models.

The Fab ribbon transformer claims to improve the sonics of these microphones rivaling the most expensive models anywhere.

Sadly the Fab 56 microphone did not rival the Royer 121, not even close. The Fab was not bad sounding but when volume was matched between the various candidates in our test, at the end of the day and with the exception of the BadAax, all the Chinese microphones sounded very similar.

If the Fab 56 was really improved by the addition of the high-ratio transformer it seemed like we should really hear a big tonal difference. The Fab 56 actually took more gain to match levels than the stock MXL R144.

We're going to follow up with Chris at Fab and discuss our findings and allow him to comment. 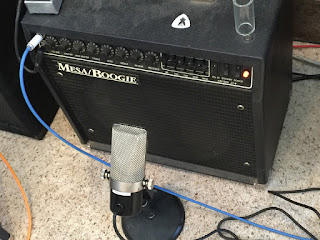 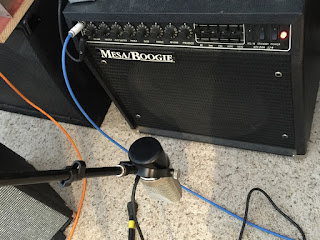 The various prices of these microphones ranged from $79 on the low end for the Nady RSM-4 from Amazon.com, up to $1295 for the Royer R-121 from Sweetwater.

You can read more reviews and get more information about the Royer on the Sweetwater web site here.

The Fab 56 was the most expensive of the Chinese microphones at around $250 US delivered in Florida via USPS.  The Fab 56 ribbon microphone is only available by direct purchase from fabmicrophones.com in the UK.

The guitar tracks for reamping were recorded with a RNDI (Rupert Neve Direct Interface) box into Logic. You can read reviews of the RNDI on the Sweetwater web site here.

After all the recording, the tracks were played back out of Apple Logic X, through the X32 output, into a stock Radial Engineering Reamp box, then into the Boogie for recording with the subject ribbon microphone.

For testing and all the recording we used the Midas-designed digital preamplifiers in the X32 mixer. These are very precise and allow the gain to be set very accurately and repeatably in .5 dB increments.

We purchased all the items in this review, none of these were complimentary or samples provided for review by their manufacturer so the various microphones were representative of what a consumer might expect to receive if the items were purchased new.

HIGH on TECHNOLOGY is a production of www.proworkshop.com

Wishing you all good music!