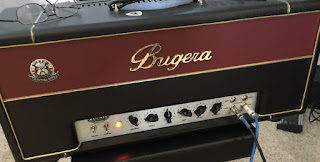 I got my Bugera 1960 guitar head about a year ago from Sweetwater. I really like this amplifier a lot, it has amazing tone which is a lot like the Marshall Super Lead heads I had in the 70's and 80's. There is just one problem with the stock head, it's too LOUD!

Bugera rates this all tube amplifier at 150 watts of output, I bet if you floored it out into an ideal load it would easily achieve peaks that high, this thing is a power monster. It does have a very cool post-phase-inverter master volume control on the back control plate but the amps tone takes a big hit with this engaged, this amp is all about that vintage tone and the original Marshall heads did not have master output volume controls.

The 1960 has operating options which means if you don't activate them you really have a seriously vintage amp in the style of the early Marshalls. Activating any of the options may diminish the vintage quality of the sound but give you access to some option you need, such as the effects loop or the post inverter master volume.

I have several Marshall 4x12 cabinets loaded with Celestion-speakers to play this amp through, both with and without Vintage 30. I have a pair of 4x12 in my speaker isolation room for recording. I've re-amped some guitar tracks through the Bugera and by the time you have the volume to where it sounds good in the control room, you can't walk in to the isolation room because it's like a jet landing in there it's so loud. Amazingly I've never blown a speaker yet but I'm sure that day is coming.

I got on the internet and did some searching and found a technical note from Music-Group, makers of the Bugera amplifier brand. They tell you right there how to reduce the power on an Infinium model 1960. This is only for the newer version of the 1960 heads that have the Infinium self biasing feature. 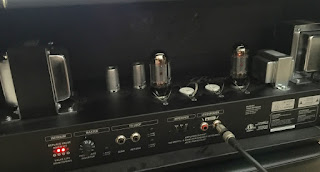 The first step to reducing the output power is to pull two EL34 power tubes. There is a row of four power tube sockets labeled 1 through 4 in the back of the 1960 head. You can pull the inner pair or the outer pair of power tubes, these are the only supported combinations that won't blow the amp up. The Infinium LED for sockets two and three will glow when the amp is running but that is ok, the two tubes you have left will do all the lifting. Pulling a pair of tubes easily reduces the output by 50% or more but it's still at least a 60 watt amp and it's still LOUD!

The next step to reducing power is to replace the pair of output tubes with much lower output tubes. The good old 6V6 is a great choice, it's rated with a 14 watt power output under ideal circumstances and it's a perfect fit for the tube sockets in the 1960. In a class AB amplifier a pair of these typically makes around 20 watts.

So how does a 1960 sound when it's powered by a single pair of 6V6? Incredible, especially in the high frequencies, notes in the higher register sound full and strong, never thin or fizzy. It still makes a lot of volume when driving a Marshall 4x12 but it's completely different and controllable, you can actually stand being in the same room with the speaker cabinet when the amp is seriously cranked.

Check my attached pictures, I'm running my stereo Hagstrom with Seymour Duncan humbuckers into the two channels and they're up on 7, this would be killing you with the original tube and power output combination, but with the lower power output tubes it's vintage Marshall nirvana with a 6V6 twist. Power chords crunchy, full, powerful and authoritative along with sustain and ultra controllable feedback, it's tone heaven.

The 18-watt Marshall used EL84 output tubes, these won't fit in the 1960 without a couple of expensive adaptors. I may try that for fun at some point in the future. It sounds really good with this pair of JJ 6V6 and no other changes.

I played through the hot-rodded 1960 with humbucking pickups, single coils, Fender Stratocasters, my '61 Duo Sonic, Lucille and several other guitars. The tone, the feel and the feedback are fantastic and the amp never misbehaved in the slightest. This power-reduction mod should actually improve the reliability of this tube head since the power supply and output transformer are all running at a quarter of their original design parameters.

I bought my Bugera 1960 Infinium head new through Sweetwater, you can read more reviews of it here on their web site.

I got my JJ 6V6 power tubes from Amazon, I bought four so I could try it with four power tubes. That was before I found the technical note about removing the inner or outer pair of tubes. After hearing it with only two 6V6 power tubes I don't think I'll need the other pair any time soon. I'm loving the new reduced power level, this changes everything about how you can use this amazingly affordable tube guitar amp.