by Mark King for Proworkshop.com


The Proworkshop studio records and mixes a lot of rock music but I've also recorded lots of classical projects from opera singers to a large vintage harp (one of the most difficult things I've ever recorded). Microphones are a critical part of the recording chain and so we need to have many styles and models to cover all the various sound sources.

Back in 1985 there were not nearly as many large diaphragm condenser (LDC) microphone choices available as there are today. The internet has made the entire world a resource for designs, parts and pieces.


I purchased my first large diaphragm condenser microphones in the early 90's, a brand new pair of AKG C414B-ULS, they cost me around $1000 each and that seemed like a fantastic amount of money to spend on microphones. I still have them and love the way they sound. I've since acquired another pair from eBay, these microphones are very neutral and flat response sounding to my ears.

Since then many microphones have come and gone from our mic locker. One of my biggest disappointments was a brand new Neumann U-87ai microphone I purchased around 2004. I acquired this microphone because it's an industry standard reference piece of studio equipment, I was able to buy it for dealer cost and I wanted to know how it would perform on vocals. Now I know, my partner and I tried that microphone on everything we could, from male and female vocals to electric guitars to acoustic guitars to room mic, even tried it on the snare drum. It got a pretty good sound as a room mic on some rock guitar tracks I recorded one time but that is the only time I really liked it on anything. It's tough giving up an iconic piece like that but the money needed to be put into something we can use not icons so my U-87ai went to a gentleman in New York courtesy of eBay.

I had a Beyer MC740 large diaphragm microphone for several years back in the 80's, it was on loan to me from Beyer as a thank you for providing sound for the company at a trade show. Beyer had another large diaphragm model in a smaller body which we had in the studio for several weeks doing evaluations. I used the MC740 on a few recordings and thought the sound was ok, a bit peaky in the high frequencies and not particularly rich sounding, it worked well on a female vocalist I recorded a lot. I did not care for the smaller body Beyer LDC on any source.

LDC microphones always seemed a bit like magic to me, with their big gold diaphragms glistening from behind multiple layers of protective mesh. The legends of Frank Sinatra and other classic artists using expensive vintage Neumann tube microphones are fueled by pictures of them recording with these microphones in the 50's and 60's.

What if we could peel away all the marketing hype and build our own large diaphragm condenser microphone? Today you can, there are many resources for parts and pieces. You can start with an existing microphone and rework it with all new parts or build one from scratch and choose exactly what goes inside. 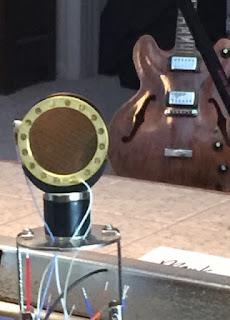 A great way to get started is building a microphone kit like the ones offered by microphone-parts.com. I've built and modded many microphones and can tell you the results are worth the effort. If you're squeamish or need help building one you can do that at Proworkshop under supervision and be sure you're going to end up with something quality at the conclusion of the build. 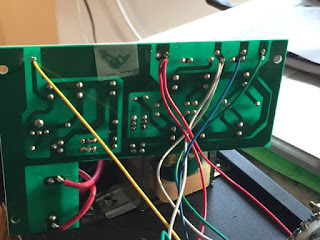 The V-Twin started life as a 12-251 kit from microphone-parts.com. It's actually an easy build for someone who knows how to solder and takes their time. 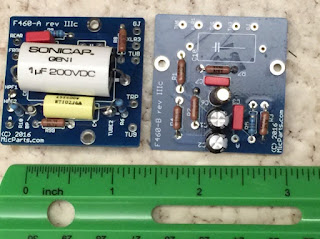 All of the circuit components provided are premium quality and they're all included in the kit, you don't need to shop for anything else. The multi-layer circuit boards are made in the USA, the capacitors and resisters all come in a bag, the builder must completely populate and solder the circuit boards. 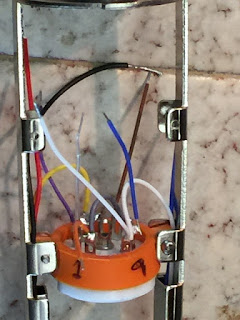 Why V-Twin? The circuit uses a twin-triode vacuum tube and unlike the original C-12 microphones this design is loosely based on, this microphone uses both triodes in the tube to achieve better headroom and lower noise.

These days the original AKG C-12 tube microphones sell for ridiculously large amounts of money, $20,000 and more. The history of this microphone is easily found on the internet. The version that was produced for the US market utilized a high quality 6072 vacuum tube. The V-Twin uses the same tube type.

Completely organizing your parts, taking your time, being very careful and constantly checking your work will help you achieve success when building microphones. 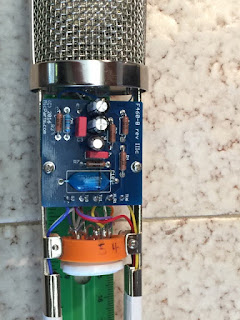 SO DID IT WORK? HOW DOES IT SOUND?

Yes it worked as soon as I powered it up. I let the tube burn in for 24-hours and then began doing some serious testing. This microphone sounds fantastic, not at all like something you can acquire for $600. I've had microphones that retail for $4000 and higher that don't sound this good.

The microphone body is sourced from China, this helps keep the cost low. It's obviously not German quality but it's plenty good for day to day use in a recording studio. The supplied custom screen top for the microphone is beautiful and functional, much better than what you might find on imported Chinese microphones. 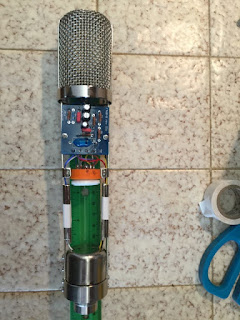 I've since modded the circuit with some New-Old-Stock (NOS) transformer coupling capacitors, this has given the microphone an even bigger low frequency sound and with greater proximity effect. Whether you want this is a personal choice. 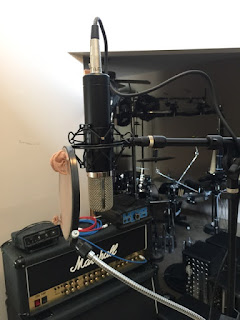 This microphone sounds incredible, very smooth, natural, with a sweet sounding high frequency response, nothing at all like the harsh sounding inexpensive LDC models by MXL and Apex.

It sounds good on everything I've used it on, cymbals, acoustic guitar, vocals, drum overhead, room mic, it excels in all these positions and was only $650 including shipping and a few hours of my time.

If you're in the Melbourne Florida area you can have a Proworkshop instructor assist and guide your build, that way you'll be sure of what you'll get when you complete the project.

The finished 12-251 (aka V-Twin) microphone-parts kit easily competes with and bests microphones like the MicTek CV-4 and the even more expensive Peluso 2247LE. The V-Twin has a polished expensive sound (but don't tell anyone how inexpensive it really is, just let them think you're a microphone god).

Building my own microphones has been extremely rewarding, not only did I acquire some of my favorite and best sounding mic's I've ever owned but they are now demystified. If I accidentally wreck the diaphragm or some customer pukes on a mic I know I can fix it for a very reasonable price. I know every bit there is about the mic because I put it together.

I'm a huge fan of what Microphone-Parts.com is doing, great parts, excellent instructions and ultra fast delivery, this is a great modern company with great service. Check them out.

Proworkshop is not affiliated in any way with Microphone-Parts.com, we purchased their products for full price via mail-order.