by Mark King for Proworkshop.com 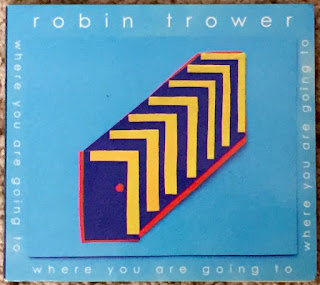 I still remember the first time I ever heard Robin Trower playing guitar. I was at a frat house with my friend Tony in Atlanta Georgia, it was the summer of 1973 and we were returning from a vacation in Florida. We were sitting in the living room and somebody down the hall in a bedroom was playing “Bridge of Sighs” fairly loud. That was actually the second album by the Robin Trower band but it was the one that really put Robin in the world spotlight as an artist. As soon as I got back home I bought the album and began playing the grooves off of it.

Friday night, April 1st, 2016, the latest version of the Robin Trower band played to a sold out and very appreciative crowd at the King Center in Melbourne Florida. At age 71 the man has still got it, it was a fantastic concert. His guitar playing is as fluid and great as ever.

It was a three piece band, drums, bass and Robin on guitar. The bass player sang the classic Robin Trower songs that were originally performed by the late James Dewar. He did an excellent job of capturing that unique deep and soulful vocal sound that Dewar made so famous.

The show opened with “Day of the Eagle” and ended with “For Earth Below”, fans of classic Trower tunes were not disappointed. The crowd roared to their feet after every song, Melbourne Florida loves Robin Trower.

Robin played through a pair of Marshall Modern-Vintage heads which each sat on one 4x12 Marshall speaker cabinet. From our 13th row center seats we could easily hear the direct sound from his guitar amplifiers and it totally rocked. His special effects consisted of some chorus pedal, his signature distortion sound and some wah-wah.

The band performed half a dozen songs from their new album, I liked their live versions better than the album, especially the title track which was amazing live. The rest of the concert consisted of tunes from all across Robin's 40+ years of solo albums.

Robin endorses Fender guitars and they produce a signature Robin Trower custom shop model, he has discussed it on YouTube in interviews. His guitar appeared to be a standard Fender sunburst Stratocaster with a maple neck sporting the old style larger head stock, the bridge was vintage style which is another indicator he was using a custom shop model. It was basic, straight forward and sounded great.

With my Nikon 7x50 binoculars I could read the numbers on the volume knob of his guitar. I’ve never had such a good vantage point to watch him perform. One thing that surprised and amazed me a bit was how he kept switching from pickup to pickup throughout his guitar solos. The tone remained relatively the same no matter where he had the pickup switch and I never heard any clicking or pops from all that switching. Same for the volume control, he was constantly working it but it never looked hurried or rushed, he appeared calm and totally in control at all times. The band played for an hour and 25 minutes, then they returned to the stage for a two-song encore.

THE LATEST ALBUM BY ROBIN TROWER

The band's latest album is titled “Where You Are Going To”, I received my copy from Amazon about a week before the concert and we gave it a good listen prior to the concert.

This is one of those CDs that grows on me the more I listen to it, that's a good thing. The guitar tones are classic Robin Trower and the songs while new have a certain familiarity to them. Even though his equipment has changed a lot over the years Robin has still got his own unique signature tone.

The real surprise on the new Trower album is the vocals, Robin sings all the lead vocals and he sounds really good. It’s not at all the style of vocals done by James Dewar, more like a rocking Bob Dylan sound but better. I like it and that is coming from a hard core old-school Trower fan.

If you have not checked out the latest album from Robin you can listen to previews and buy it on Amazon.

Good music to everyone!

Here's a link to the Robin Trower website, check his tour schedule.