THE RIDES, THE BAND, THEIR ALBUMS, THE REVIEW

THE RIDES
by Mark King for Proworkshop.com

Why is Stephen Stills (you know, the S in CSN&Y) playing in a blues band with Kenny Wayne Shepherd and Barry Goldberg?

Because it’s where he is supposed to be. Don’t read any more, go buy their CD’s on Amazon or wherever you buy music. There are two to choose from, they are both awesome and infectious (provided you enjoy listening to a killer blues band).


Chris Layton (who laid down the backbeat for Stevie Ray Vaughan) is sitting in the drum seat and the beat just grooves and grooves, this band feels good to listen to. They are not a copy of anything, it’s all original and it’s all good.

The first time I listened to some samples of The Rides on Amazon I was not very impressed but I remembered another album that sounded weird at first and grew on me every time I listened to it, Keith Richards first solo album “Talk Is Cheap”. After thinking about that I ordered the first CD by The Rides. It is indeed one of those CD’s that grows on you the more you listen to it. I have to drive about 45 minutes north to get to the guitar repair shop, listening to The Rides makes that drive go by in about 10 minutes, it’s like time travel.

THE RIDES - LIVE AT THE KING CENTER IN MELBOURNE FLORIDA

Back on April 5th, 2017 we had an amazing concert here in Melbourne Florida, The Rides opening for Buddy Guy. I bought tickets the day they were available and got great fourth row seats for Mary and I. 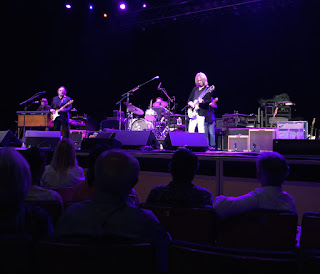 THE RIDES, LIVE AT THE KING CENTER

When Stephen Stills walked on to the stage the sold out 2000 seat King Center jumped to their feet and went nuts. The boys in the band plugged their guitars in and got right down to business. We were sitting about 30 feet out in front of Kenny Wayne Shepherd who was positioned on the right side of the stage from the audience POV. Stills and Goldberg were on the left side of the stage. 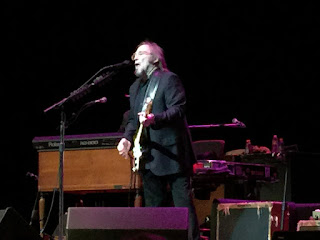 The sound system and mix for their set totally sucked but sitting where we were we could easily hear the stage volume and it was electrifying. Kenny Wayne’s guitar solos brought repeated spontaneous applause and cheers, they were breath-taking (provided you like blues). Kenny has been a star since he was 15, today at age 39 he has matured as a guitar player, he looks and sounds in command of every aspect of what he’s doing. He was playing through three Fender amplifiers on stage and we could hear them very clearly where we were sitting, it was killer guitar tone. It takes a lot to get a WOW out of Mary, Kenny’s guitar solos had her whistling and yelling along with everyone else who were blown away by what was going down. It was Texas style rock’n blues and so much more. 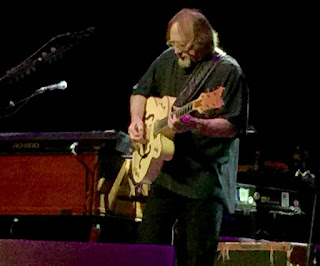 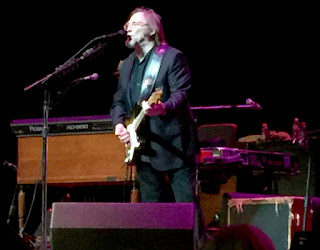 Stephen Stills looked like he was having the time of his life. While Kenny switched guitars after almost every song, Stills appeared to hang with the same Stratocaster throughout most of the show. For a while he used a beautiful white Gretsch electric guitar. His guitar amplifier appeared to be a very trashed looking old Fender bassman and another tweed something that I could not see clearly. His tone was totally original and revealed why he has been inducted into the rock n roll hall of fame not once, but twice. He plays from his heart and it totally shows. 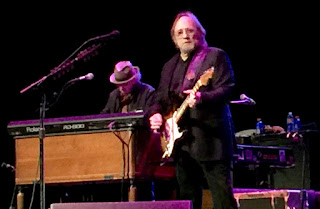 Barry Goldberg was wearing his signature hat and piloting the great organ tone from behind his Hammond B3 console with a pair of Leslie’s behind him. Thank goodness we were sitting so close and his stage sound rocked because the mixing engineer totally butchered Barry’s tone in the PA mix. His command of the Hammond organ and his song writing prowess are both legendary. His work with Mitch Ryder and the Detroit Wheels was extremely influential on me at a very young age, it was really a joy to see him performing live. 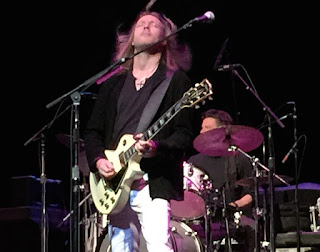 There is no excuse for why the PA sucked so bad for The Rides performance. Fortunately it did not dampen the crowds appreciation for what we had in front of us. The Rides are a super group in every sense of the word. Their charisma can even transcend a really sucky sound engineer, a feat I’ve rarely seen or heard. 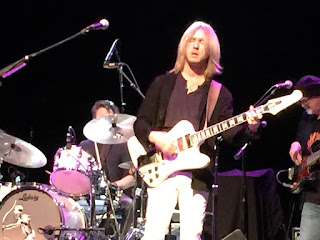 The first time I listened to this CD I just let it go by, it did not grab me, or so I thought. After a day or so I realized bits and pieces of their music was already looping in my head. That night we went to the concert and heard a bunch of the songs there along with cuts from their second album. The next day I listened to the CD again and then for a week I had their songs looping in my head. This music doesn’t grab you, it sneaks through little holes in your psyche, lets itself in and soon takes over all your background thoughts. 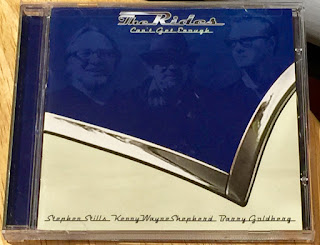 I have not listened to Stephen Stills in many years but I’ve been listening to his voice ever since I was 17, now, 47 years later, he sounds familiar, like he has somehow permeated my DNA. Kenny Wayne Shepherds blues guitar licks are both soulful and tasteful without excess. He plays the right notes and the right amount of notes in each of the songs. Can’t Get Enough is filled with tunes and tones that are instantly classic sounding and brand new at the same time.

When you buy a CD by The Rides you really get a quality product. Each disc is accompanied by a nice printed booklet full of lyrics and information. Call me old fashion but I love reading the lyrics while listening to the music. The photography and artwork on this album is visually stunning. 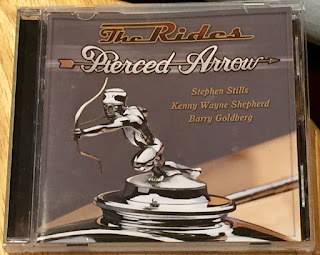 Pierced Arrow, the second CD by The Rides is even better than the first one, it debuted in 2016 at #1 on Billboards blues chart. Everything is better in this release, the band sounds like they’ve matured as a unit and grown together as a band. The original songs are fun to listen to and they are filled with all the musical magic that made the bands first album so great. Barry Goldberg penned the original music for “Use My Imagination” and the version by The Rides totally grooves. It’s music that is fun to listen to.

One of the songs on their second album reaches in and touches my soul every time I hear it, it’s “By My Side”. the lyrics are bizarre and thought provoking, the chorus slays me. It’s great to hear a modern blues song that is not about breaking up or crying about how you done me wrong. The writing credits go to Barry and Kenny on this song.

Enough with the writing and reading. There is so much great music on this CD, JUST BUY IT!

Good music to you all!