API MIC PREAMP OUTPUT ATTENUATOR PACKAGE DIY
by Mark King for proworkshop.com
I'm a big fan of the API microphone preamps, they have transformer coupled inputs and outputs along with a wonderful op amp made from discrete components. There is one big problem with these preamps, they have too much output-level for most modern recording equipment.

The solution is to add a master volume control after the output stage. In this DIY article we'll look at how to bring the vintage API 312 mic preamp in to the modern studio and control the output-level in a way that makes this preamp much more useable.

The API 312 microphone preamplifier got its start back in the 1960's when recording gear used specifications borrowed from the early days of the telephone system. Back then signals were all about power-level and we used the dBm specification to reference and measure the signal level. The signal path was 600-ohm to 600-ohm with +24dBm being the point where distortion started to increase rapidly. Unlike today's systems, those old mic preamps could still go north of +30dBm without turning into total distorted mush, in fact some engineers liked pushing the preamps into distortion to achieve unique sounds.

Today's DAW rigs typically use much lower levels and the dBu has become the reference level. When you take something like an API 312 microphone preamp and drive it into a DAW which has a maximum input level of between +18 and +22 dBu you will have a hard time turning the gain on the mic preamp down far enough to not overload the DAW inputs. You can engage the attenuator in the mic preamp to reduce the level but this makes the sound worse because you're working the discrete op amp at even lower levels. This is because the inbuilt attenuator is before the op amp not after it.

Jeff Steiger of Classic Audio Products Inc. (CAPI) was the first person I saw to fix this problem in his custom designed microphone preamplifiers. Jeff markets DIY kits that allow you to build your own 312 style mic preamp but he added an output attenuator which comes after the output transformer. This was a game changing feature because it allowed the preamp-gain to be turned up to where it needed to be level-wise and then variably attenuate the output level so it could feed in to a DAW without overloading it.

It appears to me that API has now copied Jeff's design and added master volume controls to the latest 3124 and 512 preamp models. But what about all of us with older 3124 units?

Here is the solution, a four channel attenuator box built for the API 3124. It's not available in stores but you can make your own.

You can buy the master volume attenuator potentiometer(s) directly from Jeff's internet based CAPI store. I've ordered several, you may have read about how I used these to control the output of my Warm Audio EQP units. I will add a link at the end of this article to the part in the CAPI store. Now we'll take a look at how to add master attenuators to the API 3124 original issue.

I made mine for one purpose, to work with my API 3124 quad microphone preamp, it will live permanently under the unit and always be connected to its outputs. I positioned the output level controls to match the position of the gain controls on the preamplifier, this one-to-one physical relationship makes it intuitively obvious which control is for which preamp. For reliability I minimized connectors by having a short dedicated umbilical-cable which connects the four preamplifier outputs directly to the attenuator potentiometers inside the box.

I like TRS jacks in my studio so I used them for the output jacks on the back steel enlosure. I added a second set of parallel output jacks to feed VU meters in the future.

No power supply is required, this box is entirely passive.

The magic component in this build is the triple-gang custom Bourns potentiometer from CAPI, without this part this would be a lot harder to do, I don't know of anywhere else you can buy this precision, high-quality part off the shelf. Jeff has these pots custom made for CAPI, they allow the 600-ohm transformer output to be set to any level, from zero to full on.

I also selected the optional CAPI circuit boards which make wiring this pot much easier. Be very careful when unpacking the CAPI pots, don't bend the pins or it will be a real pain trying to get all 13 of them aligned and inserted into the circuit board, you've been warned!

Drilling all the holes in the steel 1U rack mount steel enclosure was one of the most difficult parts of this project. I added ground-lift switches because hum from grounding is one of the more common connection problems. I briefly thought about just wiring the balanced outputs without grounds but at the last minute I went with switches so I could change on the fly.

This was not a complex box to build. Like others it is mostly dependent on the execution of the build since the electronics are not very complex. 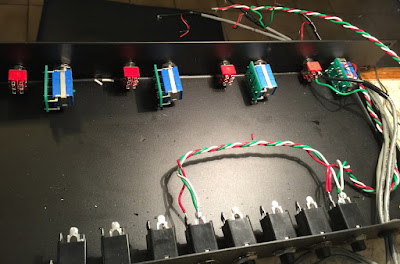 I used a steel rack mount enclosure because I have a bunch of them left over from another project that got sacked. Steel is excellent for shielding but these boxes are miserable to drill. Steel is hard metal  and it's much more difficult  to drill than aluminum, lots of cutting oil is required to keep the 3/8" drill bit from dulling prematurely or burning up. 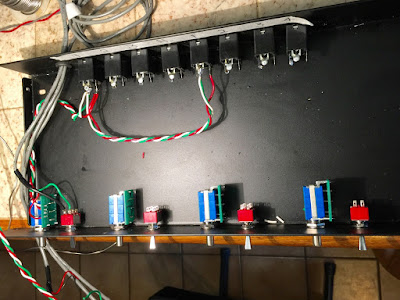 I cleaned the chassis completely with Naphtha (lighter fluid) after the drilling to get the paint back to grease free.

HOW DID IT TURN OUT? 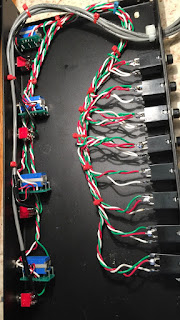 Awesome. It works exactly as I wanted. To my ears my API 3124 microphone preamps sound dramatically better. They are richer, punchier and more uniform when you can dial up some real gain on them. I can plug a bass into the DI input, crank up the gain and drop the level to achieve a sweet bass guitar tone. The master output level controls are smooth turning and let you adjust the sound to be the exact correct level, from none to full on and all points in between. 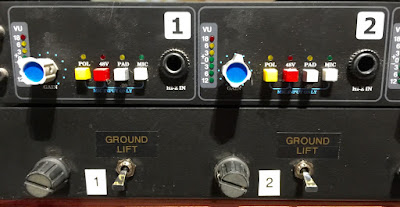 This box did not cost a lot to build. The enclosure was around $60, the plugs were $4 each, the jacks were about $3 each. The CAPI custom pots were around $33 each with circuit boards, I ordered them directly from the CAPI site and Jeff filled my order in under a week, great performance for a boutique supplier. 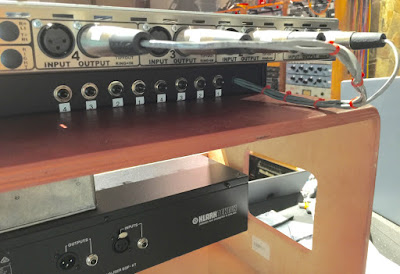 This is another of those "why did I not do this sooner?" kinds of projects. The improvement in the sound output frommy API microphone preamps is HUGE and well worth the time and effort to build this.

If you're using API or any other vintage style preamp which has high-level outputs you should definitely think about adding master attenuators for more tone options. As an experiment you could build a single channel in a small box for testing.

Several months ago I built a pair of these attenuators into a box to control the output level from a pair of Warm Audio EQP tube equalizers in the Mastering Processor Loop of our Neve mixer. Here is a link to that article. After using that first pair constantly in the studio I can't imagine not having them because there would be no other level adjustment available.

These attenuators are an elegant simple way to adjust the level in a 600 ohm balanced line.

If you buy some tell Jeff you heard about it on High on Technology Tech web site.

Want to build your own? Here is a link to CAPI web site where you can buy the attenuators and other DIY kits.

Here is a link directly to the Bourns potentiometer (attenuator) on the CAPI web site.