For years I was absolutely mystified about what is inside a Large Diaphragm tube microphone. Back in 1986 I was loaned a pair of original Neumann M-49 microphones to see if I could repair them. One was totally dead and the other was intermittent, but when it was working the sound from it was absolutely stunning and so much better than anything I had in my microphone kit. Unfortunately I did not have the slightest idea how to repair the microphones and without the internet for schematics and guidance I was afraid to get involved with that repair.

Now that we do have the internet and so many great Do-It-Yourself (DIY) suppliers of schematics and parts it has become a relatively trivial task to build yourself a kickass sounding microphone. I've personally built several from kits I bought from Microphone-Parts.com and the results have been great.

I've also used replacement parts to upgrade and improve microphones I already had in my inventory. Many of these were barely used because I did not care for the sound after I used them for a while on a  variety of sources. After I installed high quality replacement parts the mic's deliver sound quality and performance that is truly on par and up there with models selling for over $3000.00 each.

The following guide details the major components of any high voltage vacuum tube large diaphragm microphone. As you can see there are not that many parts in a tube mic, the overall sound of the mic is most dependent upon the capsule at the top, but all the components shown can have a critical impact on the overall sound of these types of microphones.

Other factors not shown which can impact the sound of a mic include acoustic dampening material inside the microphone, internal shock mounting of the capsule and the shape of the metal grille that surrounds the capsule. 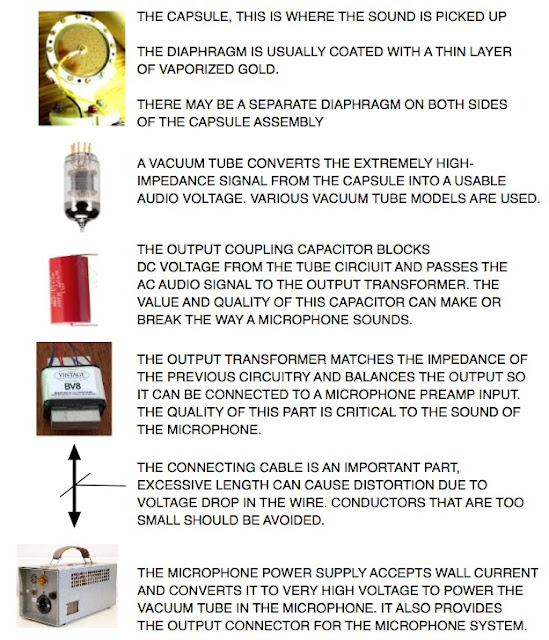 The capsule, tube, output capacitor and transformer are all contained inside the microphone.

The cable that connects the microphone to the power supply is typically at least a 7-pin connector with seven conductors of wire inside the cable jacket. The various electrical conductors provide electrical ground, one or two high voltage connections plus the ground, pin 2 and pin 3 connections that feed the XLR output on the microphone power supply.

ALL THE MOJO, NONE OF THE VOODOO
Can an inexpensive microphone sound as good as an extremely expensive vintage model? "As Good" is subjective, most people who have microphones that cost over $5000.00 each are not going to want to hear about anyone comparing a hot-rodded Chinese microphone to their boutique pieces.

I've heard vintage Neumann U-47's, M-49's, U-87's and AKG C-12's back when they really sounded good. There are many expensive clones of these great microphone models and there are an infinite number of even lower priced microphones.

My technical skills combined with parts obtained through the internet have provided me with microphones that rival anything I've ever used or heard in person regardless of price. I'm ok with that personally, I like lower priced things that perform WAY above their cost basis.

CONCLUSION
You can spend A LOT or a little on a large diaphragm vacuum tube condenser microphone but no matter what brand you choose you'll find these circuit components and technologies are common among them.

There can be HUGE price differences between the individual components, inexpensive components from China can have good sonic performance when they're implemented correctly.

Boutique components like custom output transformers with exotic metal laminations and trick windings can cost upwards of $200 each. Premium output coupling capacitors can also be quite pricey compared to low grade Chinese components which are commonly found in lower priced systems.

Microphone-parts.com has a number of popular microphone models listed that can be modded with their parts. This has been a big help to me and I've found their advice to be conservative, accurate and honest. The prices on their parts are also very reasonable considering you're getting high quality performance from them.

Now you know what's inside a tube condenser microphone.