PARALLEL COMPRESSION WITH ANY COMPRESSOR

HOW TO DO PARALLEL COMPRESSION FOR CHEAP
by Mark King for proworkshop.com

If you're like me you hear about things like "parallel compression" and you want to try it but none of my old compressors have this latest bit of wizardry. What's an engineer supposed to do?
This article explains how I endowed my existing stereo compressor-limiters with this highly desirable feature for a relatively low price.

I use an external line-level mixer to give me the necessary blending controls for parallel-compression effects that can be achieved using any compressor, provided it's equipped with transformer-less balanced inputs.

Here is a simplified schematic of the parallel compression process. 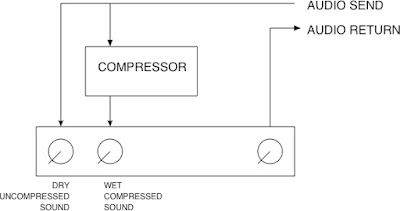 SCHEMATIC
Here is the full connection schematic for doing parallel-compression in stereo with an external mixer. The signal sources are the two TRS plugs in the upper right corner of the drawing, these are typical of the unbalanced insert-points you might find on mixers by Allen and Heath, Behringer and Soundcraft. 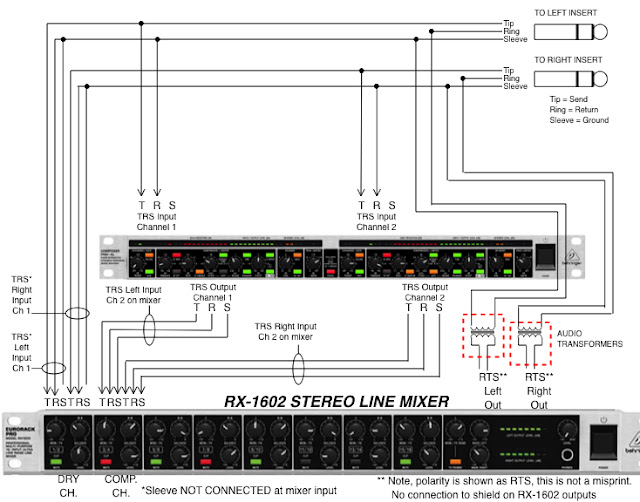 MIXING ADJUSTMENTS
You need to take care that the volume level does not increase as you add the parallel-compression in behind the dry sound. You may need to reduce the dry signal level slightly to compensate and keep levels consistent.

THE PARALLEL-MIXER
For my parallel-mixer I'm using the Behringer RX1602 line-mixer because I like the electrical performance; it has electronically balanced inputs and outputs, it's relatively inexpensive and I have a bunch of them on hand from a previous project. It's a very versatile mixer that can mix eight mono or stereo signals to stereo balanced outputs. That's a total of 16 line-level inputs available, but in this application we're only using the first two stereo inputs.

The RX1602 has lighted on-off channel-mute switches on every individual input, this allows you to turn off all the unused channels (5/6 through 15/16 are all muted) for lowest noise performance.

The on-off feature also allows you to instantly defeat the parallel-compression effect by turning off channel 3/4 on the parallel-mixer.

Conversely you can turn off the channel 1/2 dry mix and just listen to the compressed content on Channel 3/4 of the parallel-mixer. This is very handy for adjusting the amount of compression applied to the signal, I generally adjust the compressor so it is squashing pretty hard.

The parallel compression setup can be inserted into the stereo-master bus, the subgroups or any combination. In my studio setup I have parallel-compression on each of the four stereo subgroups of our mixer.

The signal from the TRS-insert-source is fed to the compressor input and input 1/2 on the parallel-mixer. This is a simple Y-connection, the relatively high input-impedance of the transformer-less differential-inputs on your compressor and the RX-1602 allows them to be paralleled without degradation or ground loops. Since the TRS-insert-source is unbalanced, the schematic connections shown utilize the differential-inputs on the parallel-mixer and the compressor as virtual-transformers to control and isolate the audio signal-ground from the source.

A pair of audio matching transformers are shown in the schematic (highlighted with red boxes), these isolate the audio-signal-ground of the source-insert-return connection point, from the RX-1602 balanced-outputs.

For the lowest possible noise it's important to follow the schematic exactly. Some of these connections may be unfamiliar to you, these connecting techniques come from years of experience making thousands of field connections on large commercial installations.

THE AUDIO TRANSFORMERS
The Edcor WSM600/600 transformer is a suitable component for this application, it delivers excellent headroom and frequency response for a terrific low price. You can buy these transformers directly from the Edcor web site. They tell you it will take six-weeks for your order to be built but in my experience it's usually not more than a couple of weeks before they ship components to me.

The audio transformers should be located physically and electrically close to the outputs of the RX1602 parallel-mixer for maximum sonic performance. The transformers isolate the mixer output from the unbalanced insert input connection.
For our installation the transformers are located inside an enclosure fastened to the 19" equipment rack which is holding the parallel-mixers and their associated compressors.

PARALLEL COMPRESSION WITH ANY LINE-LEVEL COMPRESSOR
When I started experimenting with different units providing the parallel-compression there were some big surprises. DBX models that were previously collecting dust sounded very good when used in parallel. The old Version-One ART, VLA was also collecting dust but the dark character of this piece was a nice compliment to the vocal bus as a parallel compressor.

Currently on the vocal stereo-bus is the ART Pro VLA providing parallel compression.

On the musical instrument stereo-bus is a DBX 166XL providing the parallel compression.

On the drum stereo-bus is an older DBX 166A stereo compressor creating the parallel compression.

HOW DOES IT SOUND?
The crazy idea of using the RX1602 as a parallel-mixer came to me one morning and I had to give it a try. For the first test I used some inexpensive Y-connectors and a RX1602 mixer to try the effect and see if it sounded bad or hummed.

I was very favorably impressed by the control and sound of the parallel-mixer and compressor setup, you don't hear the inexpensive nature of the compressor in the signal path at all, it does not crush your mix or wreck the sonics. The dry signal can pass straight on through the RX-1602 mixer and still sounds crystal clear.

In my setup I use a test tone oscillator to line-up the dry sound. I pass a tone out of the Soundcraft into the parallel compression setup. I mute channel 3/4 (the compressed sound) and just listen to channel 1/2 (dry) on the mixer. I adjust the mixer channel 1/2 for unity gain straight through the parallel-mixer and confirm the level using the LED output meters on the RX-1602.

Then I mute channel 1/2 on the RX-1602 and unmute channel 3/4. This allows me to adjust the left-right balance and level while confirming the compression settings on whatever compressor I'm using.

FIRING IT UP AND USING PARALLEL COMPRESSION
I like to start with channel 3/4 (compressed sound) muted and just listen to dry unaffected audio playing through channel 1/2 of the parallel mixer.

With audio playing, adjust the compressor so it indicates strong compression.

On drums I like to adjust the parallel-compressor so it's smashing the audio and heavily compressed, adding this sound in behind the dry sound is a thing of beauty for rock, pop and EDM productions. Parallel compression thickens drums like no other effect I've heard.

The DBX 166A two-channel compressor can destroy audio passing through it so I rarely used them but when the 166 is used as a parallel-compressor the fast-slick performance is a nice compliment to drums and dynamic music.

The dry sound of the drums passes through the parallel-mixer without processing, all the dynamics and clarity are preserved. Adding the smashed-compressed sound in behind the pristine dry sound is where the magic happens.

WHAT IF IT SOUNDS LIKE CRAP? TROUBLE SHOOTING
If the sound turns ugly and thin with reduced volume when you add in the channel 3/4 compression effect on the parallel-mixer then the compressor you're using probably has reversed polarity from input to output. In this case you'll need to swap or reverse the (+) and (-) connections at the input(s) of channel 3/4 on the RX-1602 to correct it.

PACKAGING ALL THE CONNECTIONS AND TRANSFORMERS
After testing parallel compression for about three months I decided I wanted it full time.

This led me to design and build "The Bus Box" a small enclosure that houses the audio transformers and provides all the connections without any external Y-connectors. I made custom insert cables to connect each bus box to the associated stereo subgroup on our Soundcraft mixing console.
Each Bus Box is a stereo device and utilizes isolated TRS female phone jacks so the signal ground can be controlled, this is critical to not creating ground loops. The upper row of jacks is the left channel connections and the lower row of jacks is the right channel connections.

For a detailed description of the Bus Box construction complete with schematic, here is an in-depth article on Proworkshop Gear.

During the experimental design phase of this project I tried a lot of different connection schemes. The one I'm detailing here is the straightest, simplest and best sounding. No buffer or distribution amps are required, using the audio transformers solved the biggest deficiency (ground loop hum) with a simple elegant solution.

The RX1602 mixer is less than $150 from Amazon and Sweetwater. The pair of audio transformers is less than $25 plus shipping direct from Edcor. The parallel-compression effect is priceless when it comes to mixing so I'd say these are small prices to pay for huge performance gains.

FINAL THOUGHTS ABOUT BUILDING YOUR OWN
You can get by without the audio transformers but to really get hum and background noise down to professional levels you need them in the circuit. This is an excellent application for audio transformers, they're doing what they do best, providing complete circuit isolation and freedom from grounding errors and the resulting increased residual noise level.

Without the audio transformers the circuit will still work. The noise floor is higher and you're operating an opamp (in output stage of RX1602) shorted directly to ground, I hate that kind of design. The opamp will put up with it but it's operating continuously with output-protection which degrades the sound and arguably reduces the life of the component.

CONCLUSION
If you build your own setup and make all the electrical connections according to the schematic you should have a very nice parallel-compression effect without having to buy a new $1000-$2000 compressor (or three of them).

Happy mixing and good music to all!