RECORDING THE BEST TONE FROM A MESA CABCLONE™

by Mark King for High on Technology 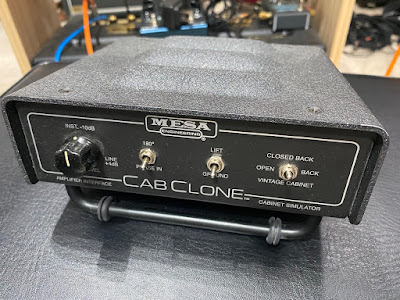 I have always been impressed with the Mesa Cabclone hardware, it feels like an extremely heavy duty kitchen appliance from the 1950's. I was a lot less happy with the recorded tones I was getting from the Cabclone. Comparing the recorded output of a Celestion V30 speaker mic'd with a Shure SM-57 microphone, to the recorded output of the Cabclone was a terrible disappointment to my ears. The Cabclone was not as bad as some directbox-attenuators I've tried but it just was not great, that is until I plugged in a speaker.

I was originally attracted to the Cabclone because it is advertised to replace your speaker cabinet and allow silent recording. It can do that but it does not sound or more importantly, feel right to me as a guitar player. Using the Cabclone without a speaker connected results in a darker, more compressed, less dynamic overall response from the XLR output on the rear.

Plugging a speaker into the back of Cabclone changes the XLR balanced output tone dramatically for the better. Generally speaking it becomes a little brighter with more natural midrange response and greatly improved "feel" for guitar players.

All of the speakers I record with are in isolation rooms, I record in the control room listening to my guitar amp sound mic'd through my studio monitors. This lets me jam with other tracks and hear a mix of what I'm creating as it is being played and recorded.

When I listened to Cabclone by itself via the XLR output it did not sound great. Honestly I was about to sell my Cabclone when I discovered how important it is to have a speaker connected.

WHY DOES THE SPEAKER BEING CONNECTED MATTER?

Tube amplifiers have at least one transformer in the audio output stage, this component matches the output of the power tubes to the speaker you connect. The speaker has a voice coil that moves back and forth as the alternating current (your sound) pulses through it. It's a dynamic relationship between the transformer and the speaker.

When you see a speaker advertised as 8-Ω or 16-Ω those are typically static DC resistance readings without audio, it's just a way for us to help match the speaker to the amplifier output stage. The actual impedance of a speaker constantly changes depending on the frequencies it's reproducing, this is part of why speaker brands and models sound different from each other.

Your tube amp is expecting to "see" changing dynamics in the load it's driving.

When you use a Cabclone without a speaker that springy dynamic speaker load is replaced by a static, fixed resistance. No wonder the tone is flat and lifeless without a speaker connected. Speaker loads are not fixed, they bounce back and forth, take that away and away goes a big chunk of your tone.

The XLR recording output on the Cabclone sounds dramatically better when a real speaker is connected. When you connect a speaker it automatically disconnects the internal static load and replaces it with the dynamic springiness your amplifier and your ears crave.

It is very important to match the Cabclone impedance correctly to your amplifier. For example, if you use a 16-Ω speaker cabinet connected to the 16-Ω output on your amplifier you'll want to be sure you're using a 16-Ω Cabclone model. There are specific Cabclone models which are made to match all the popular amplifier output impedance ratings, typically 16-Ω, 8-Ω and 4Ω.

DOES THE SPEAKER MODEL MATTER?

Understanding the need for a connected speaker led me to wonder, does the speaker make and model connected to the Cabclone output also affect the tone? Would a premium priced Celestion G12M sound the same as the least expensive Celestion Rocket 12" speaker?

I even went a step further, does the speaker need to be mounted in a proper cabinet? 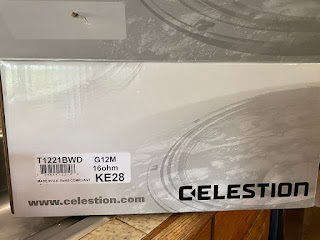 I ordered a brand new 16-Ω Celestion G12M speaker and mounted a 1/4" jack in the side of the carton it came in. I removed any packaging from inside around the speaker which could interfere with the motion of the cone. The speaker is inside the box which is folded and taped shut.

I repeated the previous step with a new 16-Ω Celestion Rocket 12" speaker. I have zero experience with this speaker, it was just the least expensive 12" Celestion I could purchase.

When the two new Celestion Speakers arrived I was shocked at their weight difference, the G12M is made in the UK and has a massive magnet compared to the Rocket which is made in China. Surprisingly, the G12M is only rated at 25-watts while the Rocket is rated at 50-watts.

For comparing the results I set up an experiment in my studio with the two 12" speakers in their respective cartons stashed away in Studio-L (the laundry room), connected via 50-foot 12 gauge speaker cables. I wanted to try each speaker with several different amplifiers which were the Marshall DSL1HR, Marshall 20-watt Origin head and the Marshall 20-watt DSL head.
The audio we would hear was supplied by the XLR output on a 16-Ω Cabclone, driving into a preamp on my Soundcraft console and played back through my studio monitors.
Each amplifier was tried and evaluated in all modes before moving on to the next speaker to test.

Additionally I went back and forth between the internal Cabclone load and one of the connected speakers providing the load. I also went back and forth between the two boxed speakers and compared them directly to each other.
For the studio-monitor listening tests I was joined by my lovely partner Mary who has very acute high frequency hearing and a wonderful understanding of clean and distorted guitar tones.
The test guitar was my favorite Jackson loaded with Seymour Duncan humbucking pickups.

The sonic differences in overall tone between the various loads were quite surprising. The G12M sounded better than the Rocket 50 but the Rocket 50 sounded a lot better than the Cabclone internal load resister. The Celestion 70-80 in a closed back cabinet sounded almost identical to the G12M in a shipping carton, to my ears the 70-80 was just a little brighter sounding.

The Celestion Speakers in their shipping cartons are a great studio recording aid. When they're combined with Cabclone boxes they provide a fast and easy way to get the characteristics of a real speaker instead of resorting to impulse responses and active dummy loads.

You can get a new Cabclone from Sweetwater for $299 and a new Celestion G12M speaker for $125. Install a $3 Switchcraft jack in the side of the carton and seal it up with some packing tape. That brings it home for only $428. Compare that to the least expensive Mesa IR based Cabclone at $599 or the even more expensive deluxe model at $799 and you can see why I like this setup so much better, the real speaker is less expensive than the IR based system plus it sounds and performs exactly like a real speaker not a digital simulation.

The only IR based systems I have on hand to compare are the Kemper Profiler Rack and the Stymon Iridium. I personally prefer the sound of the real tube amp with Cabclone and a G12M speaker.

Since discovering the sonic-goodness lurking in a properly connected Cabclone I've single handedly driven up the resale price on the used 16-Ω version on Reverb.com by buying six of them so each of my amps has a Cabclone connection. I like this setup so much I finally sold off all my ribbon microphones, the direct connection from the Cabclone is much easier to control than mic'ing a guitar cabinet acoustically.

Some of the other advantages Cabclone offers are no room-honk acoustically from an untreated room, no crosstalk, no feedback, consistent tone every time, no microphone misplacement, no phase cancelation, heavy duty and durable construction and lots of options.

For the best recorded tone from a $299 Mesa Cabclone, plug in a speaker.