My very first contact with the Electro-Harmonix brand happened one day when my older brother brought home a "Big Muff Pi" fuzz pedal sometime around 1970. It was a large chrome, folded metal box with mushroom shaped knobs which looked like they'd been harvested off my fathers vintage Zenith TV.

That EHX distortion shaped one of my earliest distortion-pedal concepts; "the amp you connect a fuzz to ultimately determines how it will sound".

That may sound simplistic but even today I read reviews where people say bad things about pedals that work for me. The Big Muff Pi is one of those pedals, people love it or hate it. If you play it through a Princeton open back amp with a 10" speaker it's not going to sound the same as playing it through a 100 watt amp driving a 4x12 speaker cabinet.

With 50 years of history EHX has released many different versions of the Big Muff Pi pedal which have spawned all sorts of legends. Triangle, Rams Head, Op-Amp and Russian are just a few of the various descriptors people use to define which Big Muff model they're using. I checked online and found 10 different models of new Big Muff pedals available today.

For this review I'm focusing on the classic Big Muff Pi design. This is the packaging I remember from 50 years ago. It's a rather large steel box with a chrome plated top. The knobs are much more refined than those on the first one my brother bought. I purchased this review unit through Amazon about six years ago because I was afraid they might discontinue this classic design and package. Most of the alternate Muff models come in cast metal boxes, they don't have the same instantly recognizable shape of the original.

I am a fan of companies that do things in the USA. Electro-Harmonix has been crafting their gadgets and is currently providing jobs for over 100 New York City based workers. To remain competitive EHX uses foreign sourced parts like knobs and pots combined with American workers assembling the products.

The classic Big Muff Pi has three knobs, a footswitch, an LED to tell you when it's ON and an external power supply inlet which uses standard inner-negative/outer-plus 9-volt DC wiring. The original version had no LED, no external power inlet jack and no battery access door on the rear.

The enclosure on this modern iteration is pure vintage in size and shape, it's a large steel box which is constructed from folded sheetmetal rather than the modern trend of building in cast zinc-aluminum boxes. The classic is instantly recognizable because it's been threaded through the music industry for 50+ years.

One of the three knobs is labeled "Volume", it controls the output level on the Big Muff Pi. The "Tone" knob increases high frequency content when you turn it clockwise. The "Sustain" knob adjusts the amount of fuzz and distortion.

In use the Volume knob can be set to a high level and this creates a big boost which can drive a tube amp to produce some outrageous wailing tones that sustain forever. Personally I feel like The Big Muff Pi needs to be pushed to sound great. Certainly you can use this pedal with smaller amplifiers, just know that the classic sound this pedal is capable of won't be well represented when played through a little amp at low volume.

I can't imagine my distortion toolbox not including a Big Muff Pi pedal. While my current example is not a vintage original it does provide the buzz and sustain effects I remember most. There are so many ways to use this pedal to create long-sustaining fuzz leads, learning how to use it with other pedals is a great way to jam through an afternoon.

My favorite setup involves using a pair of digital delay pedals in series being fed by the Big Muff Pi. I like using a wah pedal or a small graphic eq on the input to have more tone control options.

Another favorite combination is a slightly pushed blues sound through a tube amp, driven by the Big Muff Pi. Big sounds come from big speakers making some volume, it's some of the recording magic I depend on. It's not apartment friendly but it's the tone I grew up with and it's what I crave in my own music.

If my large, classic styled Big Muff Pi died I'd buy another one right away. With a current street price of under $85 this pedal is low in cost, high in nostalgic value and it's capable of epic guitar tones.

This pedal inspired a boutique industry of clones but none of them combine the tone and value of the original by Electro-Harmonix.

Thanks for reading, good music to you!

This review is copyright January 2021 by Mark King. It's not ok to copy or quote without written permission. 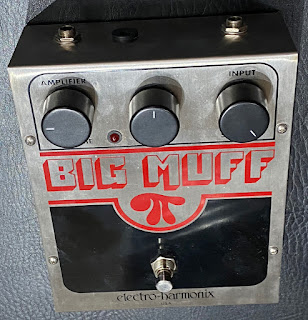