I have used and enjoyed Electro-Harmonix gadgets since the company became known in the very early 70's. The first guitar effect I ever bought was an LPB-1 which stands for "linear power booster". It was a small folded metal enclosure that plugged directly into the output of my Les Paul custom.

Fast forwarding to today's modern version of the LPB-1 we now find it constructed in a sturdy cast metal enclosure. The controls and functions are the same as the original.

The LPB-1, Linear Power Booster is an additional gain stage which you can switch on and off. When it is ON the gain knob varies the amount of boost added to the signal running through the LPB-1. I used the original LPB-1 to boost the signal I fed into my vintage Fender Princeton amplfifier. By cranking up the LPB-1 I could get the preamp stages of my tube amp to distort more.

The modern LPB-1 has a True Bypass footswitch to turn the effect on and off. An LED indicates when the effect is ON. A single knob adjusts the amount of boost created. A standard inner-negative/outer-positive power inlet jack allows the LPB-1 to be externally powered, EHX recommends minimum of 100mA current for the external power connection. An internal 9-volt battery can also power the LPB-1 but you must remove four screws and the rear of the box to change the battery.

You can use the LPB-1 as a boost in front of a distortion pedal to add more saturation. This really is a one-trick pony, it's either on or off, boosted or not. There are no hidden buffer capabilities or extra functions.

I like the modern LPB-1 but it has some quirks. The input impedance is a bit low for a box that could be inserted inline with a passive guitar. If this is your only pedal in use then you may notice your guitar sounding a bit darker in tone when this pedal is switched ON. It could be more saturated depending on the Boost knob setting but the input impedance of 43 kohms is a heavy load for passive guitar pickups to drive. If you have a guitar with active pickups or a buffer pedal before the LPB-1 then the high frequency roll off quirk will be greatly reduced.

Overall the LPB-1 is not a high fidelity device. Mike Mathews, the main man at EHX would be quick to point out that the whole point of this pedal is greater distortion.

I searched the EHX web site and could not find a specification for how much gain the LPB-1 introduces when maxed out but from my use I can say there is a lot of boost on tap. With a street price of only $40.80 the LPB-1 is 1/3 the price of the much more expensive Fulltone 2B. 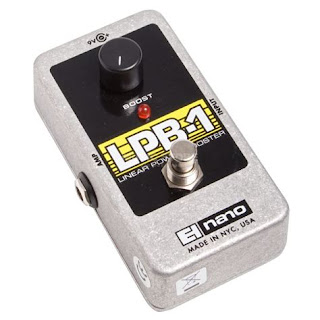 If all you're looking for is a boost in gain then the LPB-1 may be just what you want. If you've got active guitar pickups or a buffer between your guitar and the input of the LPB-1 then you likely won't notice any tone-robbing effects from the low input impedance.

In spite of its tonal quirks I can't imagine not having an LPB-1 in my arsenal of effects pedals. The low purchase price, heavy duty construction and massive gain boost available make this a good choice for tone chasers.

This review is copyright January 2021 by Mark King, it's not ok to copy or quote without written permission. Thanks for reading High on Technology.