The Earthquaker Devices “Dispatch Master” is an easy to operate reverb and echo combined into a single stompbox enclosure. This one pedal creates two of my favorite ambient effects and puts them in the footprint of a regular size Phase 90 stompbox. All that would be pretty cool by itself but the Dispatch Master adds wonderful sonics and long delay times that make this pedal sound gorgeous whether you’re using it inline with your guitar or in the effects loop of an amp.

THE PARTS OF “THE DISPATCH MASTER”

REVERB- The reverb effect is controlled by a single knob which increases or decreases the volume of the reverb. The MIX knob is the control which blends between no effect and the mix of reverb and echo.

ECHO- 1.5 seconds of delay time are available, that’s a lot, over double what typical Memory Man™ bucket brigade or clone tape echo pedals provide. 1.5 seconds is an awesome playground of delay time. The “TIME” control adjusts time between repeats and the “REPEATS” control determines how many repeats you get.

The simplicity of the controls combined with the excellent sonics delivers a pedal with extraordinary useability. It’s easy to use this pedal because it is so simple to start having an awesome combination of reverb and echo. Some combo pedals look like the control panel of a jet, this one delivers all the sound in a package that gets you quickly making music instead of reading manuals.

All those wonderful echos and reverb tones are turned on and off by way of a precision sealed relay which is controlled by what looks like a standard footswitch. The special footswitch Earthquaker Devices uses is a momentary soft pushbutton which is more comfortable to press when you’re playing barefoot, there is no annoying “snap” to overcome. This footswitch allows the Dispatch Master to be used like a regular effect, push-on and push-off, but there is an alternate momentary function. If you press and hold the footswitch the effect will turn on and be heard as long as you continue to hold the button. When you release the button the effect will be turned off. This allows the musician to paint sounds with momentary effects added in to the performance but not left on to dominate it.

PLAYS NICE WITH OTHERS

Feeding one echo into another is a favorite method of mine to create delay mayhem. Try feeding an Earthquaker Avalanche Run into a Dispatch Master and get ready for a rhythmic roller coaster ride that can take on a living breathing life of its own. The combination of these two reverb/echo pedals is a playground of fun for shoegazers and ambient fans.

Earthquaker Devices has been a proponent of top mounted I/O jacks which allows pedals to be packed in tighter next to each other on a pedalboard. The jacks across the top of the pedals allows them to be patched without disturbing the mounting or order of pedals on a pedalboard.

Reverb and Echo together in one small, powerful package

I like the Dispatch Master a lot. In many ways it is like a stripped down version of the Avalanche Run which is also by Earthquaker Devices and is reviewed elsewhere on High on Technology.

If a quality echo and reverb in one, compact, easy-to-use package fits your needs then you should check out the Dispatch Master. There is a reason this is one of the biggest selling pedals by Earthquaker Devices, it delivers huge ambience in a small package.

Good Music to You!

©2022 by Mark King for High on Technology. It’s not ok to copy or quote without written permission. 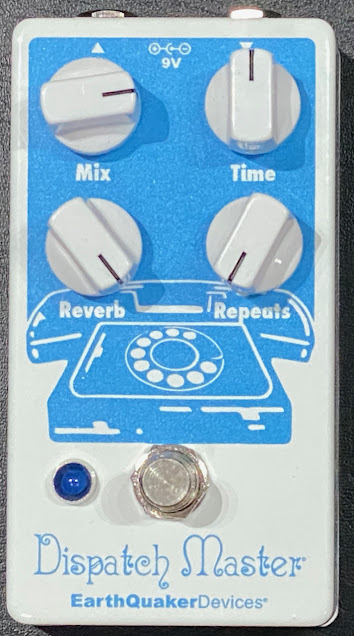